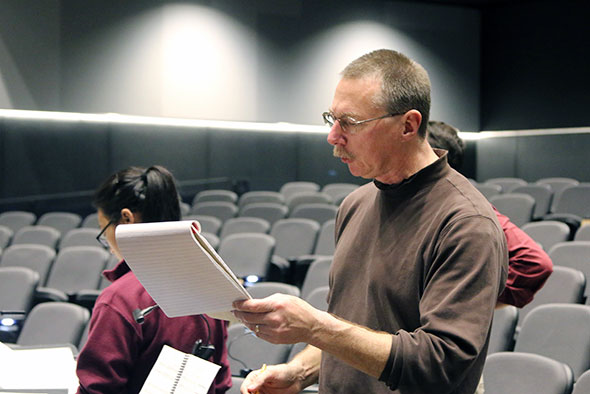 Tim Moylan is Professor
of English and Director of
Theater at the St. Louis College
of Pharmacy. He is also
Treasurer of the SCRC and
Lord High Treasurer of the
Queen Elizabeth I Society.

As a graduate student, I was encouraged by Dr. Donald Stump, my then instructor and later dissertation director, to submit a paper I wrote for his class on Elizabeth I to the South Central Renaissance Conference.  Although I had taught for almost twenty years in high school, this was one of my first forays into the world of big-league academic scholarship.  I had read about and heard first-hand the horror stories of graduate students being grilled, or worse, dismissed at conferences, so I was more than on edge attending my first SCRC sessions.

The tone of the conference was uniformly welcoming and affirming.  The senior scholars took a genuine interest in the graduate students’ work and especially in them as students, fellow scholars, and people.

The scholarly rigor was everywhere in evidence: the other papers erudite, well-written, and well-argued; the questions and discussions direct, detailed, and insightful.  What was not happening, though, was what impressed me the most.  I witnessed none of the academic arrogance, snobbery, or just plain meanness I had heard might happen at an academic conference.  The tone of the conference was uniformly welcoming and affirming.  The senior scholars took a genuine interest in the graduate students’ work and especially in them as students, fellow scholars, and people.  Make no mistake, we were not given a pass as to the scholarly expectations, and I more than once defaulted to the stock and lame response, “No, I hadn’t thought about that, but I certainly will look into it.”  However, all the back and forth was done in a spirit of genuine inquiry and interest, with an eye to pushing the junior scholar to, in fact, “look into it, and to get back to us with something we can publish.”

That first experience drew me back to the conference the next year, and I have attended almost without exception ever since.  I am happy to report that its essential character has remained the same, and while my direct experience is predominantly with the members of the Queen Elizabeth I society, I have attended and presented in other sessions as well, and those interactions have had the same affirming character.  In fact, one of the premier draws for me of this conference, in addition to its supportive atmosphere, is the variety the affiliate organizations provide.  I have met and count as friends many colleagues in the Marvell Society and the Society of Renaissance Art History, as well as Shakespeareans and musicologists.  As each conference concludes, I am left only with the felt sense of having missed out when I couldn’t be in two or more sessions at once.

I am an unapologetic advocate for this conference and strongly encourage other scholars on all levels to participate in it, to submit to our flagship journal, and to welcome others as we have been welcomed.

Registration for SCRC 2023 is now open! Save $20 by registering by March 1. Dismiss